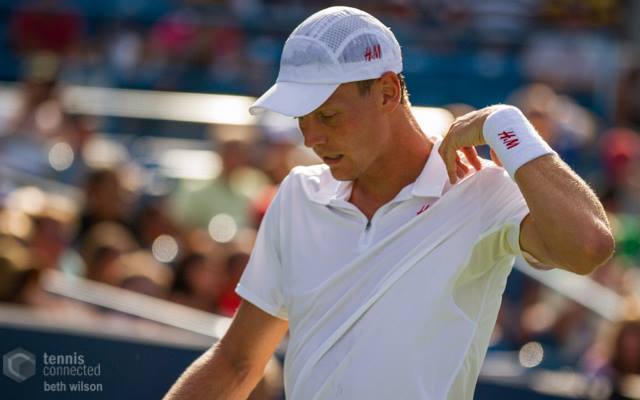 Another seeded opponent. Another dropped first set. Another stunning turnaround. Fourth seed Roger Federer captured his sixth career title at the Aviation Club in Dubai with a gripping 3 set win over third seed Tomas Berdych tonight in front of another capacity crowd in Dubai.

Federer started the final better than he had started his semi-final against Novak Djokovic, the Swiss star breaking Berdych in the Czech player’s second service game before being unable to consolidate the break. That break back was part of a 4 game run for Berdych, who stormed out to a 5-2 lead in the opening set courtesy of some booming first serves and laser-like forehands. Berdych, who entered the match with an ATP-leading 84 percent win rate on first service points in 2014, maintained his advantage from there and pocketed the first set, 6-3.

Berdych’s flat and heavy groundstrokes were putting Federer under immense pressure, the Czech star securing a break for a 3-2 lead in the second set and a glimpse of the title. But the former world number one was the clear crowd favourite and, as was the case in his semi-final against top seed Djokovic, Federer refused to go away and lifted his game to another level. With Berdych’s mind perhaps wandering to the trophy celebration, Federer broke back immediately and then held serve to go ahead 4-3. Serving at 4-5 to stay in the second set, Berdych started to become irritated by the raucous crowd and lost focus, giving up his serve to love and dropping the second set, 6-4, after 73 minutes.

With the momentum clearly on Federer’s side, the Swiss maestro held serve in the opening game of the third set and had 3 break points in Berdych’s opening service game of the deciding set. The former Wimbledon finalist somehow found his way out of trouble to level at a game apiece, but the writing was on the wall. With Berdych’s first serve percentage slumping, Federer was able to break in the fourth game to open up a 3-1 lead. A deft drop shot indicated Federer’s confidence and gave him a 4-1 advantage, and from there it was simply a matter of time before the Federer name was etched on the trophy once more. The valiant Czech managed to save 2 match points at 3-5, but Federer duly served out the match to record a 3-6 6-4 6-3 win in a touch under 2 hours and claim title number 78 of his illustrious career.

For Federer, it’s a huge step forward after he underachieved in 2013, and he will enter the Masters 1000 event in Indian Wells full of confidence. For all the naysayers, Federer still has the game and the belief to beat the very best when he is fit and healthy. For Berdych, it was one that got away, but the third seed is in great form right now and has his sights firmly set on a top 5 ranking. If he can keep up his form, he’ll be an extremely dangerous player in the Masters events and Grand Slams this year.

That’s it for the coverage from Dubai this week. I hope you have enjoyed the coverage. I’ll be back later this month with the latest issue of my monthly column, I-Formation.