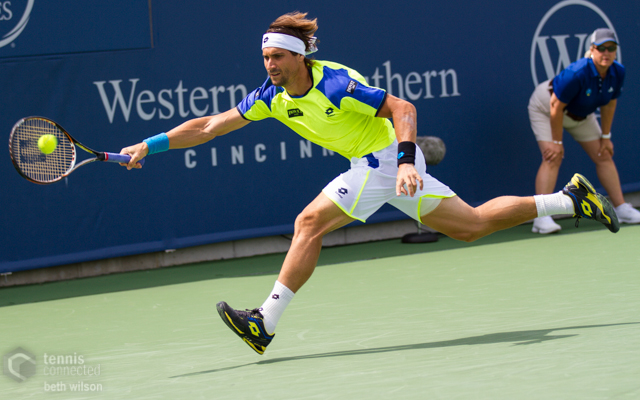 In his first real test of the tournament, the Swiss superstar passed with flying colours, blasting 43 winners against just 21 unforced errors and winning 34 of his 41 forays to net – a statistic that is sure to impress his new advisor, former world number one Stefan Edberg. Tsonga seemed unusually sluggish and couldn’t get his A-game going in the somewhat windy conditions, but that should take nothing away from what was probably Federer’s best performance in over a year.

Federer will face Andy Murray for a spot in the semi-finals, after the Scot beat lucky loser Stephane Robert in 4 sets. Murray was in control for most of the match, but the Wimbledon champion did smash his racquet in frustration after squandering 4 match points in the third set and losing the set in a tiebreaker, before recovering his composure in the fourth set.

Grigor Dimitrov’s best ever run at a Grand Slam continued on Day 8, the young Bulgarian seeing off the in-form Roberto Bautista Agut in 4 sets.  With 11 aces, Dimitrov was too strong for his Spanish opponent, taking control in the decisive third set and eventually recording the win in 2 hours and 24 minutes. Dimitrov faces a huge task if he is to make it through to the semi-finals, the twenty-second seed up against top seed Rafael Nadal in the quarter-finals. The world number one was bothered by a nasty blister on his hand, a very solid opponent in Kei Nishikori, and a time violation in the ninth game of third set, but weathered all of those storms to prevail in 3 tight sets, 7-6(3) 7-5 7-6(3).

In the women’s tournament, third seed Maria Sharapova followed top seed Serena Williams’ lead by exiting in the fourth round, the former champion outplayed by Slovak Dominika Cibulkova. Things appeared to be going well for Sharapova when she took the opening set 6-3, but the gritty twentieth seed levelled the match at a set apiece and ran away with the deciding set, taking it for the loss of just one game.

Cibulkova faces Romanian Simona Halep for a place in the semi-finals, after the eleventh seed registered a similar type of win to Cibulkova on Day 8. After splitting the first 2 sets with eighth seed Jelena Jankovic, Halep took complete control in the decider, wrapping up the match with an emphatic 6-0 scoreline in the final set.

Defending champion Victoria Azarenka won her Australian Open rematch against Sloane Stephens, the Belarusian a model of consistency against the American, who had an erratic day on court, racking up 32 unforced errors in her 6-3 6-2 loss. Azarenka’s next opponent is fifth seed Agnieszka Radwanska, who overcome Caroline Wozniacki’s conqueror, Garbine Muguruza, in straight sets, 6-1 6-3.

Following her crushing fourth round win over Ekaterina Makarova, Li Na joked that coach Carlos Rodriguez was upset with his charge’s performance in the third round, where she was down match point to Lucie Safarova and narrowly avoided being bundled out of the tournament. The fourth seed’s performance in the round of 16 represented a vast improvement on her effort against Safarova and demonstrated the type of form that has seen Li pencilled in as one of the favourites for the trophy, especially now that Williams and Sharapova have departed Melbourne Park.

Italian veteran Flavia Pennetta seems to have been given a new lease of life following time out of the game in 2012 and early 2013 due to injury. After making the semi-finals at Flushing Meadows last year, the twenty-eighth seed has maintained her Grand Slam momentum in Melbourne, knocking out ninth seed Angelique Kerber en route to the quarter-finals. I’ll back Li to prevail in this one, but if the Chinese star is off her game Pennetta will take full advantage. Li in 2.

These two players already represent a couple of the success stories of the Open, even though we are only at the halfway stage of the tournament. Rising star Eugenie Bouchard has announced herself at Grand Slam level, the young Canadian reaching the second week of a major for the first time in her career. And former world number one Ana Ivanovic has sent a clear message to the rest of the WTA Tour that she is back to her best, taking down top seed Serena Williams and local hero Sam Stosur en route to the quarter-finals.

Ivanovic has far more experience on the big stage, and is striking the ball incredibly well at present, but I am a huge admirer of Bouchard’s game and I predict a very bright future in the sport for the thirtieth seed. I’ll take Ivanovic to win more of the big points and ultimately claim the win, but give it a year and Bouchard could well be starting these sorts of matches as the favourite. In any event, this should be a great contest to watch. Ivanovic in 3.

Seventh seed Tomas Berdych is into the Australian Open quarter-finals for the fourth successive year, and has been in sparkling form to date at Melbourne Park, not dropping a set in any of his matches to date. Berdych has never been past the quarter-finals stage at the tournament, but this match represents a huge opportunity for him to do so.

Third seeded Ferrer is a two-time Australian Open semi-finalist and is about as solid and consistent and competitive as they come on the ATP Tour. If Berdych wants to get the better of the Spaniard, the Czech will need to keep his unforced error count low, stay patient and serve well. It’s a tough assignment, but one that I think the former Wimbledon finalist is capable of successfully completing. Berdych in 4.

The last couple of Grand Slam clashes between this pair have been almighty affairs. In the fourth round of the Australian Open last year, Wawrinka had Djokovic on the ropes, before the Serb escaped in 5 sets. And so it was again the case in New York later in the year, when Djokovic caused Wawrinka more heartbreak by ousting him in 5 sets in the US Open semi-finals.

On one hand, Wawrinka will enter this match with confidence because the Swiss star knows his game matches up well against Djokovic’s. On the other hand, Wawrinka has to think, in the back of his mind, that even his best tennis isn’t good enough to topple the second seed. Both players have looked sharp on court this past week, and I think we are in for another absorbing battle. I’ll take Djokovic in 4 tight sets. Djokovic in 4.