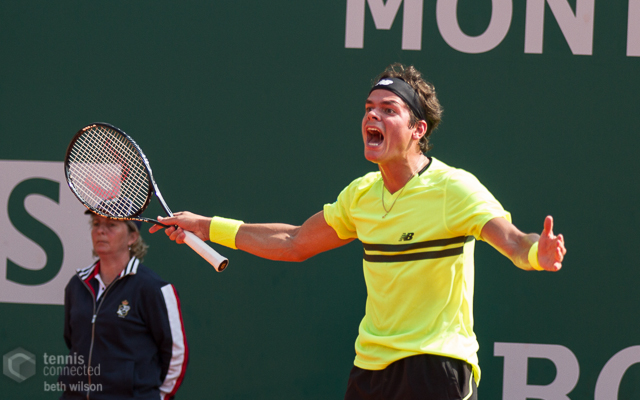 It was smooth sailing for big guns Novak Djokovic and Serena Williams on Day 5 of the tournament, both players progressing to the round of 16 with straight sets victories.

In another day of blistering heat, Williams was in no mood to waste time, dismissing Daniela Hantuchova with a minimum of fuss. Li Na also progressed to the fourth round, albeit in contrasting fashion, forced to labour for more than 2 hours to overcome Lucie Safarova in 3 sets. Aussie Casey Dellacqua continued her stellar run in Melbourne, taking down former semi-finalist Jie Zheng to set up a clash with rising star Eugenie Bouchard.

In the marquee night match, Sam Stosur and Ana Ivanovic were forced to endure a 30-minute delay with Stosur holding set point in the opening set when driving rain brought an end to the brutally warm weather. Upon resumption, Stosur quickly wrapped up the opening set, but was thereafter unable to withstand a barrage of power forehands and a sublime serving display from the Serb, Ivanovic eventually claiming a hard-fought 3 set win.

Djokovic didn’t get on court until after 10:00pm local time, but the defending champion was clinical in collecting the opening 2 sets over Denis Istomin. Apart from one hiccup when serving for the match at 5-4 in the third set, the second seed was in control as he produced a 3 set win. Djokovic faces Fabio Fognini for a place in the quarter-finals after the Italian ousted big-serving Sam Querrey in straight sets.

Third seed David Ferrer put in an impressive performance to dispose of Jeremy Chardy in straight sets, as Tomas Berdych also booked his spot in the round of 16. Less successful were seeds Jerzy Janowicz and Richard Gasquet, bowing out of the tournament at the hands of Florian Mayer and Tommy Robredo respectively.

World number one Nadal bested Monfils in the final in Doha earlier this month, in what was a close and hard-fought encounter. The unpredictable Monfils does have a reasonably good record against the top seed, having beaten the Spaniard a couple of times in previous years in Doha.

Over the best of 3 sets, I would give Monfils a better chance of upsetting Nadal – the streaky Frenchman is capable of sublime shot-making and extraordinary feats of athleticism on court. However, in a best of 5 sets match, I think Nadal has a decided advantage over his opponent today. The Spaniard loves to turn a match into a physical contest and I think he will be too strong for Monfils down the stretch. Nadal in 4.

Andy Murray has warned his fans not to expect too much too soon in his return from back surgery, and so far his results has suggested as much, with losses to Tsonga in Abu Dhabi, Mayer in Doha and Hewitt at Kooyong all reflecting the fact that Murray is still short on match practice.

Lopez is a tricky opponent at the best of times, his swinging leftie serve the source of major headaches for his rivals. But Murray is one of the best returners in the game and should be able to neutralise the Lopez serve and control the points from the baseline. He may not be at his absolute best, but I think Murray will have enough to get past Lopez in this one. Murray in 4.

Less than a week ago, French seed Gilles Simon was on crutches due to an ankle injury. Since then, Simon has outlasted Daniel Brands 16-14 in the fifth set in the opening round and then won another 5-setter over Marin Cilic. Simon has shown incredible grit and determination, but I seriously wonder if his body will let him perform at his best in this clash.

Tsonga has looked sharp in Melbourne so far and seems to be back at full fitness after struggling with knee issues at the end of last season. I think Tsonga, as the far more fresh of the pair, will be too strong for his countryman in this one, particularly if he is serving well. Tsonga in 4.

I’m really looking forward to this clash between 2 of the up-and-coming players on the ATP Tour. Canadian Milos Raonic has a huge serve and has performed better on tour to date out of the pair. Bulgarian Grigor Dimitrov is still to reach his potential but showed with some big wins last year, including one over Novak Djokovic, that he has the game to match it with anyone.

Now coached by renowned Australian coach and fitness expert Roger Rasheed, look for Dimitrov to be more focused and fitter this season than he has been in seasons gone by. If Raonic serves well, he will be tough to beat, but if not I think Dimitrov could claim this one. Dimitrov in 5.

A semi-finalist at Melbourne Park last year, Sloane Stephens loves performing on the sport’s biggest stages, having also turned in very good performances at Roland Garros and the All England Club. The American is a natural athlete and a fierce competitor, and she will need to be on her game today.

Svitolina is a rising star on the WTA Tour and is a former junior Grand Slam champion. The Ukrainian has already enjoyed tournament success at WTA Tour level and look for her to move up through the ranks in 2014. I think Stephens will have too much experience for Svitolina in this one, but it will be intriguing to see how Svitolina acquits herself. Stephens in 3.

Put your house on: 17-time Grand Slam champion Roger Federer to breeze into the round of 16. His opponent today, Russia’s Teymuraz Gabashvili, has done well to make it this far, but his luck will run out against the Swiss great.

Likely to go the distance: Alize Cornet has had a good start to the season and could push third seed Maria Sharapova all the way in their encounter today. If Donald Young gets firing, he could also cause some problems for Kei Nishikori.