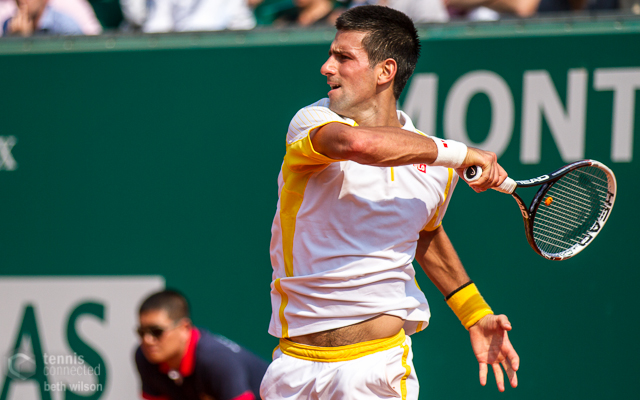 Day 4 of the tournament saw men’s fifth seed Juan Martin Del Potro crash out of the tournament, and Maria Sharapova, the women’s third seed, was very close to following him, forced to the brink to overcome Karin Knapp in the second round.

The Italian Knapp pushed Sharapova all the way in a pulsating clash played in sizzling heat. After the world number 44 evened the match at at a set apiece, Sharapova was forced to endure a third set lasting almost 2 hours before triumphing 10-8 in the decider of a match that spanned 3 hours and 28 minutes.

Having an easier time of it was defending champion Victoria Azarenka and former world number one Jelena Jankovic, both of whom progressed in straight sets. Caroline Wozniacki and Simona Halep both went to 3 sets but ultimately progressed, whilst France’s Alize Cornet scored a 3 set win over the Italian Camila Giorgi to set up a showdown with Sharapova.

Amongst the men, Del Potro was unable to capitalise on a 2 sets to one advantage against Roberto Bautista Agut, the Spaniard claiming one of the biggest wins of his career under lights at Melbourne Park. There was no such trouble for Nadal, Federer or Murray, all of whom recorded serviceable straight sets victories and limited their time in the heat.

Gael Monfils and Jo-Wilfried Tsonga were straight sets winners, and were joined in the round of 32 by compatriot Benoit Paire, who broke the heart of young Aussie Nick Kyrgios, coming back from 2 sets down to triumph. Another Frenchman winning in 5 sets was Gilles Simon who, against all odds, won another 5-setter, this time over Marin Cilic. Over seeds to progress included Dimitrov, Nishikori and Raonic, whilst there was bad news for Seppi and Verdasco, both of whom were bundled out of the tournament.

In the lead up to the Australian Open Serena Williams was complaining about the Melbourne weather, lamenting how cold it was. The American must surely be regretting that comment, as the furnace-like environment makes the going tough for players, fans, ball kinds, umpires and linesmen alike.

Accordingly, Williams will want to get through this encounter as quickly as possible. Hantuchova is a former Australian Open semi-finalist and, although she remains a fine ball-striker, the Slovak is no longer at top 10 level. Look for Williams to take an early lead and never let her opponent into the match. Williams in 2.

Ferrer is about as consistent a player as you will find, and the tenacious Spaniard had a good win over Rafael Nadal in Abu Dhabi as part of his preparations for Melbourne. I was also impressed with Chardy’s form in the lead-up tournament in Brisbane, where he made the semi-finals and narrowly lost to Roger Federer.

If Chardy can get his serve and forehand combination firing, he’s a hard man to stop, particularly on fast hard-courts. The Frenchman has claimed some big scalps in the past, including Murray and Del Potro, and I think he has an outside chance of claiming another today. But if it goes the distance, the super-fit Ferrer will be very hard to beat. Ferrer in 5.

Out to exorcise her Australian Open demons of recent years, Sam Stosur has made a good start to her quest, downing a pair of talented and in-form players in Zakopalova and Pironkova, although the Bulgarian was clearly struggling physically in their second round match.

Ivanovic is a former finalist at Melbourne Park and goes into this match as the higher seed, however I think that this will be a good match-up for Stosur, who likes to play against the big hitters on tour. I’ll back Stosur to ride the home crowd to victory. Stosur in 3.

Chinese superstar Li Na holds one Grand Slam title, the 2011 French Open, but the fourth seed has produced her best Grand Slam results overall at the Australian Open, where she is a two-time runner-up.

With the courts at Melbourne Park getting ever quicker, Li Na will fancy her chances of making another run deep into the second week of the tournament. Safarova is a talented shot-maker, and the Czech leftie will have some chances in this match, but Li Na will be a warm favourite to progress. Li Na in 2.

Crafty German Florian Mayer caused headlines a few weeks ago when he beat Andy Murray in Doha, and Mayer has continued his good run in Melbourne, disposing of Russian seed Mikhail Youzhny in the second round. This should be an engrossing battle against the cagey Mayer and the erratic but talented Janowicz.

After pulling out of the Hopman Cup due to injury and then looking like he was lacking fitness in Sydney, Janowicz has done well in Melbourne to date, fighting his way through his opening two matches. I suspect this match will go one of two ways – either Janowicz blows Mayer off the court, or the match is close and long, in which case I’d back Mayer. Mayer in 5.

Put your house on: Novak Djokovic to be all business as he attempts to minimize his time on-court against Uzbekh Denis Istomin.

Upset alert: Jeremy Chardy could trouble David Ferrer, as noted above, whilst American Alison Riske has to be given a chance against ninth seeded German Angelique Kerber. And as predicted above, Florian Mayer could well upset Jerzy Janowicz.

Likely to go the distance: Tommy Robredo and Richard Gasquet both seem to have a habit of featuring in epic 5-setters at the Grand Slams, so it will be no surprise to see the pair head to a deciding set in their clash today.