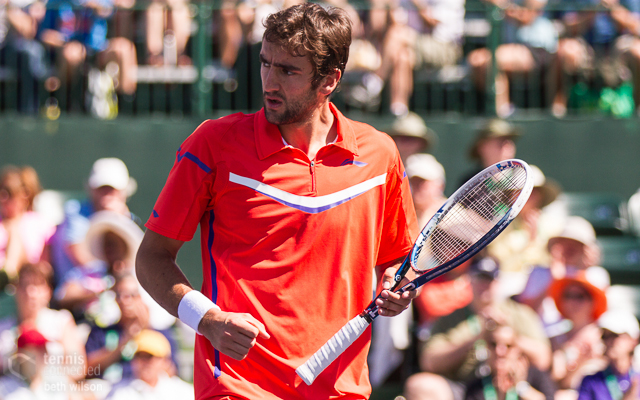 On another brutally warm day in Melbourne, the top seeds were all business, minimising their time on court as they booked their spots in the round of 32.

Novak Djokovic cruised past Argentina Leonardo Mayer, but there was better news for another Mayer, German Florian Mayer, who upset Russian seed Mikhail Youzhny in 5 sets. Canada’s Vasek Pospisil edged past Aussie Matt Ebden in the night session, whilst seeds Berdych, Wawrinka, Ferrer and Gasquet all advanced without too much trouble. Ernests Gulbis crashed out to Sam Querrey, as Russian veteran Dmitry Tursunov was another seed to exit the tournament.

I’ve been impressed with Tsonga’s form in the lead-up to Melbourne, with the former Australian Open finalist recording solid performances in Abu Dhabi and then teaming with Alize Cornet to lift the Hopman Cup trophy in Perth. With a bit of luck, the popular Frenchman could go deep into the second week of the tournament.

Bellucci is a tricky opponent, with the Brazilian leftie having been ranked as high as 21 in the world. But Bellucci has suffered from injuries and poor form in the past year and has tumbled out of the top 100 in the world rankings. As a result, I don’t give him much of a chance against the tenth seed. Tsonga in 3.

With the glory days of American tennis, which featured names such as Sampras, Agassi, Courier and Chang, well and truly over, the nation is looking to youngsters such as Jack Sock to fly the flag for the proud tennis nation in the coming years. Sock is a talented youngster but has yet to fully establish himself on the ATP Tour.

Monfils looks to be getting back to close to his best, producing some great tennis in Doha in his run to the final, and the flashy Frenchman will be looking to continue that run of form in Melbourne. I’ll back the twenty-fifth seed to move through to the round of 32 in relatively easy fashion. Monfils in 4.

Livewire Frenchman Benoit Paire ranks right up there with Latvian Ernests Gulbis as the most unpredictable player on the ATP Tour. Paire is capable of producing fabulous tennis, but is also prone to moments of wild risk-taking and losses of concentration.

Paire will need to be focused today, as he is up against a former world junior champion, Aussie Nick Kyrgios, who will be cheered on by the home crowd. Kyrgios, who upset Radek Stepanek in Paris last year, seems to play his best tennis on the big stage, a bit like countryman Bernard Tomic, and will give the match his best shot. Paire should be too strong, but literally anything could happen in this one. Paire in 4.

With compatriot and former Wimbledon champion Goran Ivanisevic now in his corner, Croat Marin Cilic will be looking to return to the world’s top 10 after battling a doping ban and injury problems in the last 12 months.

Cilic is a former Australian Open semi-finalist and will fancy his chances of knocking off the eighteenth seed Simon, who battled an ankle problem and the extreme heat to take down Daniels Brands in a 30 game deciding set. I can’t see Simon, who is somewhat frail at the best of times, having the physical ability to match it with Cilic in this one. Cilic in 4.

Big-serving Canadian Milos Raonic announced himself at the Australian Open in 2011, coming through qualifying to make a stellar run in the main draw in the first week of the tournament. The Canadian will be looking to progress deep into the second week of the tournament this time around, and if his serve is firing then he will be very tough to beat.

Hanescu is a veteran of the ATP Tour and a very capable all-court player. The Romanian is past his peak but can still do serious damage on his day. Unfortunately for him, those days are becoming fewer and fewer in number. Raonic in 4.

Put your house on: Roger Federer to ease past Blaz Kavcic. Kavcic got lucky against Stepanek when the Czech pulled out injured, but his luck is sure to run out against the Swiss superstar today.

Upset alert: As noted above, Marin Cilic could upset a fatigued Gilles Simon in their second round clash today.

Likely to go the distance: Spain’s Roberto Bautista Agut is a talented player and could push fifth seed Juan Martin Del Potro all the way in their encounter.