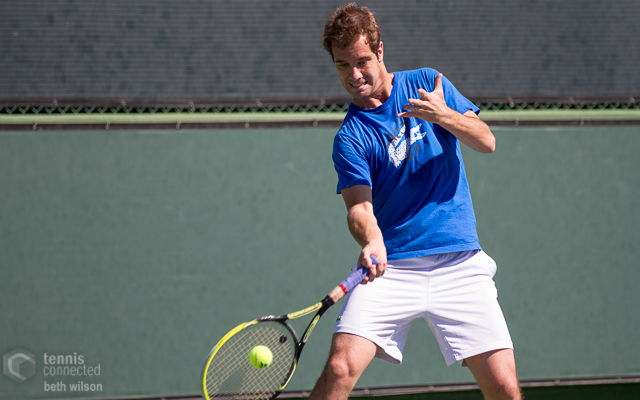 Scorching heat in Melbourne saw a record number of players retire midway through matches on Day 2 of the tournament. Whilst the anticipated blockbuster between Rafael Nadal and Bernard Tomic turned out to be an anticlimax, there was no shortage of thrilling tennis on the second day of play.

To the disappointment of the home crowd, Bernard Tomic was forced to pull out of his match with top seed Rafael Nadal after losing the first set, the young Aussie hampered by a groin problem. American John Isner also retired during his opening round match, succumbing to an ankle injury. There were no such problems for Andy Murray or Roger Federer, both of whom breezed through to the second round.

Aussie veteran Lleyton Hewitt suffered a heart-breaking 5 set loss to Andreas Seppi, whilst French seed Gilles Simon rallied to beat Daniel Brands 16-14 in the deciding set in match spanning more than 4 and a half hours. Other winners on the men’s side on Day 2 included Juan Martin Del Potro, Jo-Wilfried Tsonga, Milos Raonic and Kei Nishikori.

On the women’s side, former champion Maria Sharapova edged past America’s Bethanie Mattek-Sands, whilst defending champion Victoria Azarenka also booked a place in the second round. Sloane Stephens was another seed to progress on Day 2, joining Caroline Wozniacki, Jelena Jankovic and Agnieszka Radwanska in the round of 64. There was no such luck for Russian seed Svetlana Kuznetsova, the veteran falling to Ukrainian Elina Svitolina in the opening round.

Defending champion Novak Djokovic looked a little scratchy in his opening round win over Slovak Lukas Lacko, but it should be noted that the match was the Serb’s first official match on the ATP Tour in more than 6 weeks.

Look for the second seed to slowly increase his intensity and improve his sharpness as the tournament progresses – Djokovic will want to be at his best in the latter stages of the tournament. Argentine Mayer is a handy player but is unlikely to trouble the 4-time champion. Djokovic in 3.

Looking to overcome her cursed run playing at home in Australia, Sam Stosur made a bright start to the tournament by beating her conqueror in Hobart last week, eventual finalist Klara Zakopalova. Stosur now faces another in-form opponent in the shape of Bulgaria’s Tsvetana Pironkova.

Pironkova last week became the first qualifier to capture the Sydney International, overcoming a string of seeded players en route to the title. The Bulgarian was previously best known for impressive performances on grass-courts, but her efforts in Sydney showed that she can compete with the very best on hard-courts as well. I’ll take Stosur, but only by a whisker. Stosur in 3.

Having overcome former top 10 player Juan Monaco in the opening round, twenty-third seed Ernests Gulbis faces another stiff challenge in the second round in the form of big-serving American Sam Querrey. The lanky former top 20 player is always a dangerous opponent, and Gulbis will need to seize his opportunities on the Querrey serve, as well as concentrate on winning his own service games, if he is to succeed.

Querrey has the better serve of the pair, but Gulbis has the more attacking game from the back of the court. If the Latvian can break down the Querrey serve, he should move through to the round of 32. Gulbis in 4.

Russian Ironman and veteran Nikolay Davydenko, fresh from a fighting 5 set win in round 1, clashes with the ninth-seeded Frenchman Richard Gasquet for a place in the third round. Whilst Davydenko is a step slower than he was in his prime, the Russian remains a consummate professional and his opponent must always perform well in order to topple the former top 5 player.

Gasquet enjoyed a stellar year in 2013, capped by a run to the semi-finals of the US Open, and the flamboyant Frenchman will be looking to build on such form in 2014. If he can withstand the oppressive heat in Melbourne, I’ll back Gasquet to prevail. Gasquet in 5.

Swiss teenager Belinda Bencic is tipped for a bright future on the WTA Tour and the youngster has already impressed at this year’s Australian Open, working her way through qualifying and then upsetting Japanese veteran Kimiko Date-Krumm in the first round in 3 sets.

Bencic has nothing to lose in this encounter, but I think that two-time Australian Open finalist Li Na will have too much weaponry for the young Swiss player in this one. The Chinese superstar is at home on the hard-courts at Melbourne Park and should record the win with relative ease. Li Na in 2.

Put your house on: 5-time champion Serena Williams to steamroll Serbia’s Vesna Dolonc in their second round clash.

Likely to go the distance: Julien Benneteau’s clash with seventeenth seed Tommy Robredo has all the makings of a grueling 5 set encounter.