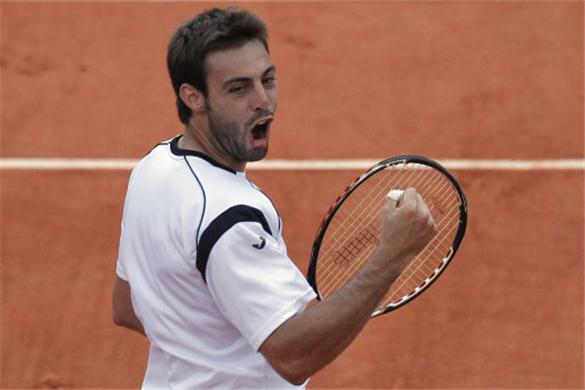 Proving himself as an important member of the Spanish Armada, 26-year-old Marcel Granollers has the all-important task of leading his Davis Cup team against a dangerous Canadian squad in Vancouver this weekend.

Entering the tie off of a semifinal appearance at the Australian Open with partner Marc Lopez, the reigning Barclays ATP World Tour Finals doubles winner has quietly put together the best twelve months of his career.

Currently ranked No. 34 in singles and No. 5 in doubles, Granollers provided some insight into his pre-season regime, how he almost didn’t make it to the Tour Finals and who the best video gamer is amongst his Spanish compatriots.

Q) How did it feel to win the Tour finals and reach the Australian Open semifinal? At this stage do you believe you can win a grand slam in singles or doubles?

A) The World Tour Finals was unexpected. I had a bad shoulder going into the event and I didn’t have great expectations.
It got better match by match and the feeling in the end was really overwhelming, especially because we got so much support from the crowd and from home. In Australia it was different. I must say that I was hoping to make the finals this time and play the Bryan brothers. We were disappointed.

In the future, who knows. We are a young partnership and we will continue playing together, so sooner or later I hope we will go all the way.

In singles it is quite a bit tougher. I reached the fourth round at my best slam, so I need to work a bit longer to improve.

Q) What were the major factors that contributed to you finishing No. 34 in singles and No. 10 in doubles to end 2012?

A) I have worked constantly during the last years and didn’t have many ups and downs. My mental strength has improved thanks to all the matches that I’ve played on a high level and thanks to the day to day work.

Q) Talk about being on Tour for the past 10 years? What type of friendships have you developed on Tour? Who are your best friends?

A) I am very good friends with most of the Spanish players. We know each other since we were under 12 or so. It is long-time friendships that will surely last after the end of our tennis careers. Marc (Lopez) is my best friend.

Q) Which Spanish players are the most fun to be around? Who is the most serious off court? Who is the best at video games? Who usually ends up paying for dinner when you go out as a group?

A) The funniest guys are probably Feliciano Lopez or Marc Lopez; you laugh a lot with them. Impossible to find a serious one outside the court, we make fun of each other all the time, although we don’t do crazy things. Video game champions are probably David (Ferrer), Rafael (Nadal) and Marc (Lopez). When we go out we always split the bill, just like regular friends.

Q) Having the best year of your career in terms of singles and doubles ranking, what goals have you set for yourself heading into 2013?

A) I want to keep improving my game. It is difficult to set yourself a ranking target, because everybody is working hard out there and there are a lot of young players coming through. Let’s say that I want to keep being seeded at the slams and slowly move forward.

Q) Can you specifically state what your fitness program consists of? What do you eat during tournaments? What kind or rituals do you have before matches? How many rackets do you string up every day? What tension do you use and does that change on different surfaces? Do you enjoy working out? How many hours of sleep do you try and get before a match day?

A) I have a good physical base, I have great endurance and I like to work on it. What we improved in the years is my speed and coordination. I don’t have a diet, I just stay away from fats and try to eat fruit and vegetables. I normally have a snack before the match, then I go back to the locker room with Fernando Vicente, we speak a bit about the match and we wait together, away from people and the noise. I try to have always four new racquets each match so that I don’t need to string while I am playing. I usually go up a bit in tension when I play on hard court. Let’s say normally on clay I string between 24-23 kg, and then on hard court I am stringing 25-24 kg. I love working out every day, but I need competition. If I don’t compete I get bored of practicing. I try to get nine hours of sleep, never less than eight.

Q) Was there ever a time during your career when you thought of quitting the sport? When the pressures of competing or traveling were too much for you?

A) I never really thought about quitting. But there was a period a few years ago, when I saw everybody so much stronger than myself and I talked myself down a lot. I was starting to play qualifying at the slams and doubted if I would ever make it.

Q) What do you enjoy the most about traveling on Tour?

A) I love traveling and I like to have a look around when I go places. I like to meet new people.

Q) Who was your tennis idol growing up?

A) I didn’t have any idols but I liked Marat Safin, Carlos Moya and Lleyton Hewitt.

Q) Which tournament would you most like to win and why?

A) The Open de Godo in Barcelona. I moved to that club when I was 12 years old and have been a member ever since. I used to go and watch the tournament with my dad and it’s a nice feeling to play it with all my family watching, even those who never travel with me.

Q) Do you see Spain continuing to be a dominant force in men’s tennis going forward? Are there any young prospects coming up and if so who are they?

A) Well, it is difficult to say. The level of Spanish tennis has never been this high in our history, so it will be difficult to keep it up for the next generation. There are some good, young players like Javier Marti, but it takes many years to move from juniors to pro tennis so they need some more time.

Q) What does it mean for you to play Davis Cup? How was your Olympic experience this year?

A) It is great to play Davis Cup, especially with these team members, incredible sport icons. Davis Cup is always sold out in Spain and people really feel it. I enjoyed staying at the Olympic village, seeing how other athletes live and worked. It was a unique chance to become friends with other sports personalities.

Q) Fans and commentators have made reference to your grunting during the past year. Can you talk about why you do it and if you care if it bothers your opponent or the fans?

A) I know, but it is something out of my control. When I am tense or really tired I grunt sometimes. But it is not something I think of, it just happens.

Q) Where do you see the future of tennis going? Will we see more serve and volleyers coming up, or will the game be dominated by baseliners for the foreseeable future?

A) I believe that players will play more from the baseline and hit harder and harder.

Q) What’s your favorite surface to play on and are surfaces getting slower for faster?

A) The courts are getting slower everywhere now, even the grass is slowing down. Two years ago the courts at Paris Bercy were really fast, but they made those slower now too.

A) I hope that I can keep up this level for a long time. I don’t know if I will be able to play that long. I have lot of respect for those players that can still deliver great tennis into their 40s. I am constantly playing singles and doubles but I doubt that I will last that long.

Q) How would you describe yourself as a player and a competitor? Would you say you’re more relaxed on court and off court, or are you always living life with a sense of urgency?

A) Outside of the court I am quite relaxed, I sleep a lot and enjoy life. I take my time to eat, talk and do things slowly. Once I get on the court things change, then the competitor comes out and my energy level rises. I become really active and intense.

Q) Where is your favorite place to visit or vacation to when you’re not competing or off Tour?

A) Anywhere where I can find the sea, the beach and a good temperature.

Q )What is the most powerful and important shot in men’s tennis right now? Who currently owns it?

A) The most important shot is the serve. John Isner owns it.

Q) Finally, why did you want to be a tennis player as a kid?

A) Yes, since I can remember, that’s all I ever wanted to be.