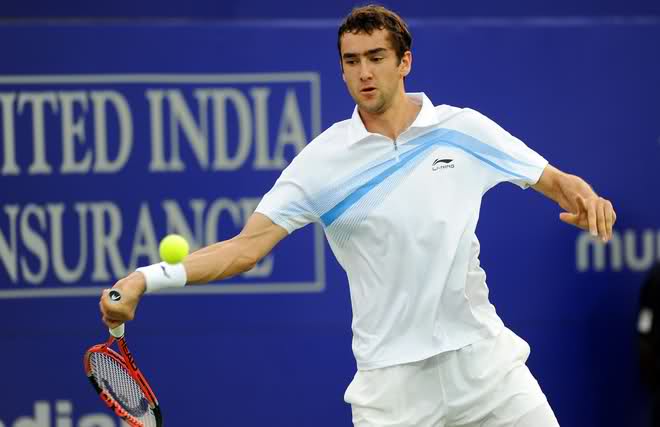 Flip-flopping the top four spots on the ATP World Tour appeared to be the order of play throughout the 2012 season. Novak Djokovic never slipped past No. 2 in the rankings throughout the year, but he did have to step up his game post Olympics to get his top spot back from Roger Federer.

The Swiss great reached the pinnacle of the sport once again by casting aside the competition to capture his 17th major at Wimbledon. Federer wasn’t as strong throughout the tail-end of the season as he was last year, but with all things considered, his year was nothing short of fantastic.

Emerging as the final remember of the Big four to capture a grand slam, Andy Murray proved many pundits and naysayers wrong in taking home the US Open and winning the Olympic Gold. I’m not totally convinced that it was Ivan Lendl’s presence that finally took Murray over the hump, but it certainly didn’t hurt his progress. Murray, who has yet to ascend to the top spot, has made it a priority going forward.

Anxiously awaiting the return of their clay-court King, are the legion of Rafael Nadal fans. Sidelined since Wimbledon with knee trouble, Rafa has been hard at work on the Island of Mallorca in preparation for his return. The Spaniard currently sits at the No. 4 position, and there’s no question that he’ll advance higher if he stays healthy. But that’s a big “if”.

David Ferrer was as solid as ever in ’12; winning seven titles and 76 matches. The bulldog 30-year-old remains in the same rat-race mold however; beating the players he should and losing to the ones he shouldn’t.

The rest of the top 10 finishers this year from the 6-10 spots were Tomas Berdych, Juan Martin del Potro, Jo-Wilfried Tsonga, Janko Tipsarevic and Richard Gasquet. Of those five players, I’d say that Tipsarevic and Gasquet have the most to worry about heading into the new year. Tipsarevic was solid throughout the past 12 months, but his lack of a killer shot should seem him slide out of the top 10 shortly. On the contrary, Gasquet holds one of the best backhands ever, but his finals appearance in Canada (a tournament that was hit hard from Olympic withdrawal and where he gained 600 points) will be hard to repeat next summer.

So, that leaves us with some potentially new blood in the top 10 to end next season. Will Milos Raonic improve on his slam results? Will Marin Cilic make good on his even-temperament and vicious backhand? Could we see Grigor Dimitrov or Bernard Tomic make a move for the top 10, or will youth and heavy expectations weigh them down?

I wouldn’t be surprised if a few fresh faces entered the top 10 next year, while the top four spots remained unharmed.

Let’s now take a look at the potential year-end ATP rankings for 2013.

1. Novak Djokovic: Pound for pound, I can’t see anyone playing better on all four surfaces next year than Djokovic. He’s exceptional on hard-courts (the bulk of the season) and his clay and grass results are only second to Nadal and Federer. He’ll have his share of points to defend in ’13, but nothing like what he faced in 2012. That being said, Djokovic should start strong and benefit from the 1500 points he gained at the WTF.

2. Andy Murray: It should be a good year for Murray, but not good enough for No. 1. The clay will again hurt his chances at the top spot, while the immense pressure at Wimbledon (even more pressure than before if you can believe it) should strike him there, and let’s not forget about his defense in New York later that summer. If there’s one solace for Murray over the upcoming season, it will be the Masters events. Not performing well in the elite tournaments in ’12, Murray will have tons of room to improve.

3. Roger Federer: One year older but just as effective. I’m not sure if 2013 holds a major for Federer, but with his exemption from all the Masters events, the Swiss star will be at ease with his schedule and enjoy the game even more. I still believe that grass remains his best shot at another slam; whereas the clay will cost him valuable points in the No. 1 race. Bottom line: Federer will always be Federer and his skill-set is timeless.

4. Rafael Nadal: Nadal could make me eat my words if he begins his comeback in full force. With the extent of his injury really unknown until we see him play again, the Spaniard is a question mark. I fully expect him to shine on the clay, but the hard-courts may be a big ask at this point. Nevertheless, it will be good to get Rafa back, and regardless of how much he plays (or wins), he’s a great draw-card for the fans.

5. Juan Martin del Potro: Owning some heavy artillery on any surface, one can certainly say that Delpo hasn’t even reached the prime of his career. Loaded with talent and mental fortitude, the missile hitting Argentine should have another glorious year. It will be difficult for Delpo to capture his second major (considering the men ranked ahead of him), but if there’s one player who can do it, it’s certainly the Tandil native.

6. Jo-Wilfried Tsonga: I’m really not sure what Roger Rasheed (Tsonga’s new coach) will be able to do about the Frenchman’s backhand or return of serve, but hey, it’s worth a shot, right? With or without Rasheed, Tsonga will remain a force on the circuit because of his explosive game and experience in the biggest matches.

7. Tomas Berdych: With only eight titles to his name, it’s no wonder why Berdych has never got past No. 6 in the world. He has that God given ball-striking that many of us dream of, but his wristy forehand and lack of confidence under pressure will likely prevent him from going any higher in future seasons. However, the good news for Berdych remains that if he plays a lot and continues to make the quarters and semis in most of his tournaments, he’s a shoe-in for another top 10 finish.

8. David Ferrer: Why the downgrade for good ol’ Daveed? It’s quite simple really: I just don’t think he can repeat a seven title, 76 match win season two years in a row. That’s not to take anything away from the respect I have for the Spaniard, but one has to think that he can’t use his legs forever to win.

9. Marin Cilic: From what I’ve seen from Cilic the past few seasons, I truly believe it’s only a matter of time before he starts challenging for majors. He’s got the height and court speed to give anyone fits, and his lack of fan fare will bode well for him in the coming years. Don’t look for Marin to be in a slam final in the next 12 months, but I think it’s reasonable to predict that he’ll be more of a factor on a regular basis.

10. Milos Raonic: Raonic let us down in 2012 by not reaching the top 10, but at No. 13 in the world he can’t be shunned, either. Owning a sonic serve and a mature frame of mind, Raonic will need to work on his return game and court positioning to reach the tenth spot.