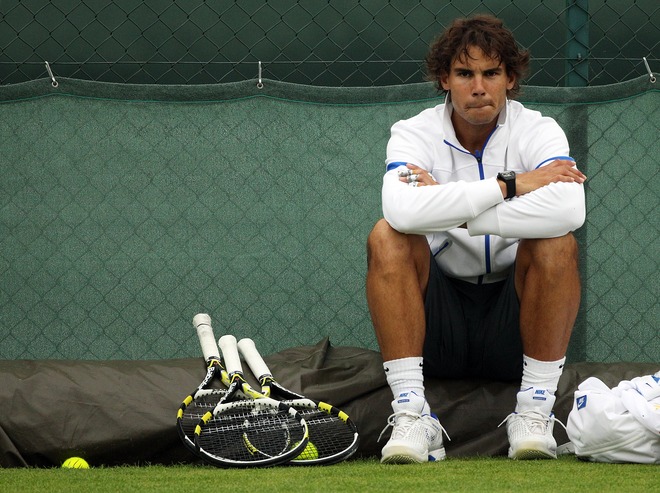 Locked in a race to finish No. 1 in the world by the end of the tournament, Novak Djokovic, Rafael Nadal and Roger Federer all have a little extra incentive to play for during the upcoming fortnight at Wimbledon.

Defending champion and current No. 1 Djokovic will look to return to his winning ways after failing to capture his fourth major in a row at the French Open. The Serb hasn’t look as sharp in 2012 as he did in 2011 (it’s really tough to say that he’s having a bad year) but he’s still playing with the kind of aura that warrants a top seed anywhere. Djokovic’s serve hasn’t been as sharp as of late, though, and if he intends on taking home slam No. 6 in London, then the most important shot in any tennis players repertoire needs to improve.

A man attempting to reach his sixth Wimbledon final in the last seven years and who is coming in off of a high is Nadal. Cruising through the clay season with the exception of Madrid, Nadal will continue to keep his aggressive mindset intact when he begins his campaign at SW19. The Mallorcan’s body has recovered to full health with the softer courts under his feet and you have to like his chances here of gaining a third title. Bagging his 11th slam in Paris earlier this month, Nadal could make a serious charge towards Federer’s mark of 16 if he is victorious in London.

Speaking of the six-time former winner, Federer will enter his most successful major with a lot to prove. To me, Federer’s record since the US Open has been impressive, but without a slam title to show for his efforts since the 2010 Australian Open, his label as a “favorite” to win one of these is rapidly decreasing. It’s not that Federer’s shots have become worse, or that his fitness has depleted since his reign at the top; it’s more about the youth, strength and the extra desire that Djokovic and Nadal have shown against him at the slam level.

Turning to some local flavor and the ongoing quest to claim at home-country champion. We all know by now that no British man has won this title since Fred Perry in 1936, and we can’t kid ourselves either when saying that there’s no better hope for title winner than Andy Murray. Reaching the semifinals the last three years, Murray currently holds a 24-6 record at Wimbledon, but his play this season would suggest that a final four showing won’t be easy to repeat. Losing his first match at Queen’s Club as the two-time defending champ, Murray has been fighting a back injury since the middle of the clay season and isn’t very confident. The pressure that the Scotsman faces at home is truly astounding, and with the added pressure of the Olympics coming up at the very same venue, Murray’s mind may not be where it needs to be for this tournament.

Other viable contenders to push for the title will be Jo-Wilfried Tsonga, Tomas Berdych and Milos Raonic. Tsonga, a semifinalist here last year, has always been a killer on grass due in large part to his lethal serve and bulldozer forehand. The Frenchman’s tactics can be a little sketchy from time-to-time because he doesn’t have a coach, but he’s still a tough out either way. Just ask Federer.

Berdcyh, a finalist in 2010, seems to have finally realized his true talents. Fighting for his wins more often these days, Berdych’s easy ball-striking and effortless power translate well on the lawns. You have to think that at some point (I’m not quite sure when) that Berdych will have another chance to claim his maiden major—could that be this year?

Finally, I’ve continued to be impressed with Raonic’s progress this season and there’s no telling where a good draw could take the young Canadian. He currently leads the ATP with the most aces in 2012 and although his return game is by no means a beast, he can produce a backhand down-the-line or inside-out forehand winner when he needs it. However, above all, Raonic’s poise in the crucial moments of a match or when he’s facing triple break point at 4-5 down in a set, remain his greatest strength and the key to a potential grass major.

With that being said, 128 players are ready to bid for the ultimate title at Wimbledon. A player can win any title in the world, but being called Wimbledon champ certainly has a different ring to it.

Let’s now take a look at the four quarters of the draw; the favorites, and finally some dark-horses.

Penciled in as the top dog here, Djokovic will be adamant on setting the tone early with some convincing play. Struggling with two complicated five setters along the road to the finals in Paris, Djokovic will now be on a surface that suits his flexible game. Beginning his journey against former No. 1 Juan Carlos Ferrero, Djokovic would get either Harrison or Yen-Hsun Lu in the second-round, with Blake or Stepanek lurking in the third-round.

We also have competent grass-courter Philipp Petzschner here, but Djokovic’s main rival in this quarter should be none other than former finalist Berdych. On the cusp of turning 27, Berdych has put together a great season and should live up to his seeding in this section.

Dark-horse in this quarter: Oliver Rochus

For all that Federer has accomplished at Wimbledon, many forget that he hasn’t made it out of the quarterfinals in the past two years. Nearing his 31st birthday in early August, Federer would love nothing more than to win either Wimbledon or the Olympic gold during the summer. I’d be surprised frankly if he’s able to defeat both Djokovic and Nadal in a row, but looking at the draw ahead he may not have to.

Granted a workable draw that begins with Albert Ramos, Federer shouldn’t see much of a challenge until either Janko Tipsarevic, John Isner or David Nalbandian cross his path in the quarters. Isner has been a bit of disappointment as of late, while Tipsarevic is doing what he can on a surface that’s not really suited to his game. Nalbandian, who has always played Federer tough, will be looking for something to prove after his default loss in the Queen’s Club final. To me, irrespective of his childish behaviour, Nalbandian is still striking a world class ball and that should aid him well given the draw that he has.

Most surprising second-round match up?: Isner vs Mahut for the third straight year in the early rounds. Amazing.

Perhaps entering the event in relatively poor form will aid Murray this time around. He won’t have the usual array of questions pertaining to winning Queen’s or any Masters event in 2012 as he has in the past, and that could in a way allow him to swing more freely on Center Court. Drawn to face Davydenko in his opener, Murray could face Karlovic in his second-round, Baghdatis in the third-round and either Raonic or Cilic in the round of sixteen. Does it get any easier for the Scot as he goes forward? No. Juan Martin del Potro is also in this section, alongside Andy Roddick and David Ferrer.

Even though Murray doesn’t need to defeat all these players to advance, that’s sure a lot of A-listers for him to get through. With that being said, Murray will fight to the end like he always does, but something tells me that it’s Raonic’s time to shine at this tournament. The Canadian’s dreams were cut short last year because of a second-round slip against Gilles Muller, and if his health stands beside him this year, the semifinals are within reach.

Jubilant over his win in Paris, Nadal will now change his focus to the earthly surface in England. Suffering an R&R loss to Kohlschreiber in Halle, Nadal arrived early in London and appears ready for another memorable run. Like any other year, Nadal’s serve seems to improve when he hits the grass, while keeping his returns deeper than he does on any other surface. With the likes of Bellucci and Dodig to contend with early, Nadal should fly through the draw before a possible quarterfinal clash with Tsonga occurs.

I believe the Frenchman’s final eight finish at Roland Garros (where he held four match points over Djokovic) was really a wake up call toward his true potential, and with the slick grass under his feet, a semifinal or finals appearances does seem likely. Nadal of course has played brilliantly here over the past six years, but with the emotional release that his seventh French Open provided, look for a letdown by the Spaniard to occur.

Best first-round match up in this section? It’s a tie between Tsonga vs. Hewitt and Kohlschreiber vs. Haas.

Grigor Dimitrov: Poised for a break through on a surface that suits his game.

David Nalbandian: Former finalist plays well with the crowd against him. That won’t be hard here.

Jurgen Melzer: Once in the top 10, Melzer can still play with anybody.

Quarterfinals: Djokovic vs. Berdcyh; Federer vs. Nalbandian; Ferrer vs. Raonic; Nadal vs. Tsonga.