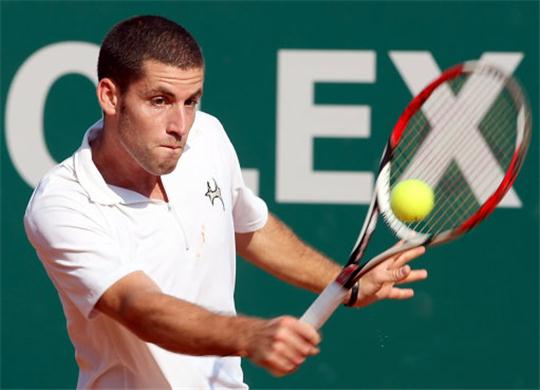 Reaching a ranking high of No. 70 on the ATP World Tour this week, Italian veteran Flavio Cipolla is quietly putting together the best season of his nine year career.

Advancing to his first Tour semifinal during the Grand Prix Hassan II in Casablanca, Morocco, Cipolla recorded his second career victory over up-and-coming Ukrainian Alexandr Dolgopolov in the second-round.

Possessing a solid one-handed backhand and great flair for the game, Cipolla had a chance to answer some of our questions before resuming his clay-court season at the Estoril Open in Portugal.

The Roma native didn’t hold back when discussing his training regimen, favorite tournament to win, and what factors will bring Italian tennis back to the forefront of the sport.

Q. What would you pin-point as the main cause of your recent string of good results?

A. I have been producing good results for a year now and I am constantly at a high level that allows me to play with the best players in the world. I wouldn’t say that there has been one particular factor for my recent results. I have always trained to improve all around and not forget any aspect [of my game]. If I had to find one [thing] to change above anything else, I would say that I have to play more aggressively compared to before.  As time goes on, players need to be able to impose their game plans if they want to survive [on Tour].

Q. At this stage of your career, what ranking and tournament goals have you set for yourself?

A. For the moment the goal is to enter the top 50.

Q. With the clay-court in full swing, what changes have you made to your daily training?

A. Right after Miami I practiced [for] two weeks on clay in order to arrive as ready as possible for Casablanca. I worked especially [hard] on my endurance and trained with weights as well. I increased the height of my shots over the net on clay, and I have worked on my topspin backhand because I will have to use it more often than on hard courts.

Q. You’ve had some great hard-court wins in the past year, defeating the likes of Alexandr Dologpolov, Bernard Tomic, Kei Nishikori, Ivan Ljubicic and Nikolay Davydenko. Would you say at this point in your career that hard-courts are your favorite surface?

A. Yes, I would say that my favorite surface is fast courts, but I am not 100 percent sure. I was born on clay and I have obtained good results on the surface. To be honest, I think that on a hard court my chances are better for beating a top player than on clay.

Q. After playing on Tour for nearly a decade, what significant changes have you seen from the tournament venues, surfaces and playing styles?

A. I think that the surfaces have become slower compared with a few years ago and in my opinion it is a positive change. I think that the tournaments are constantly trying to improve each year, but the level of the players have improved the most. Tennis has developed much more than other sports during the last 10 years, and the average level [of the players] has risen incredibly.

Q. With six Italian players currently in the top 100, how would you assess the level of your countryman and the future of Italian tennis?

A. The overall level of the Italian players has risen significantly during the last years. We now have six players inside the top 100 and many more inside the top 300. We miss that champion which would further boost the enthusiasm of the country; someone in the top 10 or the top 20. But never say never.

Q. If you could capture any tournament on Tour, which one would it be and why?

A. If I had to choose a tournament then I would have say the Roma Masters. I was born and grew up in Roma and as a youngster I dreamt of participating in the event. The tournament is very close to my heart. The support of the fans is incredible, especially for a Roman like me.

Q. Who is your best friend on the circuit?

A. I have many friends on the circuit. I have a great bond with the Italian players, but I wouldn’t want to pick just one.

Q. What’s the funniest moment you can recall during your playing days?

A. I’ll have to get back to you on that one.