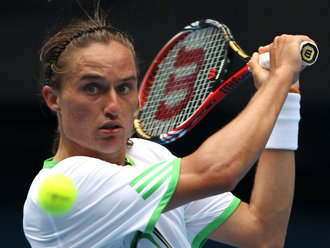 Is it really that hard to predict who will finish in the world’s top 10 a year from now, or does tennis’s current crop of competitive players make it impossible to foresee which position they will fill at the end of 2012?

We’ve had Novak Djokovic, Rafael Nadal, Roger Federer and Andy Murray occupy the top four spots since 2008; the dynamic foursome has pretty much won every major tournament under the sun since that time.

Holding a whopping 30 grand slams between them, Djokovic, Nadal and Federer will surely have their say in the majors next year. However, apart from the world’s top three players, are the rest of top tenners safe as the attempt to either hold onto their rankings or break into the elite group for the first time?

We saw Alexandr Dolgopolov and Milos Raonic stir the pot with some inspired play throughout 2011, and we surely can’t forget the quarterfinal run of Bernard Tomic at Wimbledon. The eclectic and unorthodox 18-year-old remains an anomaly in today’s game; bringing the funk and off speed rhythm into the prevalent power quotient.

The hard work and driven desires of John Isner and Ryan Harrison could also be top 10 bound in 2012; both possess different weapons, but share the commonality of never giving up.

Will there be an unknown star to emerge out of nowhere a la Gustavo Kuerten in 1997? The curly haired, colorful Brazilian injected a breath of fresh air into the men’s game by winning the French Open as an unseeded player.

I personally don’t see a breakthrough slam winner emerging anytime soon. The top four have owned this sport for so long, and have reached the latter stages of every major event for many years that it just doesn’t seem possible—at least for next year—for that trend to change.

In saying that, though, the grind of the tour has taken its toll. Federer will be 31 next year, and Djokovic, Nadal and even Murray all suffered their share of ups and downs this year. With the minimum age of a current top tenner being 24 (Djokovic) and the oldest being 30 (Federer), it’s clear that although tennis is considered a young man’s sport, experience and maturity are needed to be at the very top.

With that in mind, let’s take a look at what the ATP’s top 10 could look like in a year’s time.

1. Rafael Nadal: Why pick Rafa? Well it’s quite simple really: The Mallorcan has been the pinnacle of consistency over the past six years and it will take another Djokovic level performance to prevent him from taking back the top spot. It’s important to remember that Nadal has his share of points to defend in 2012; starting with two slams finals and a win at Roland Garros. There’s no doubt that Nadal’s confidence was shaken up by Djokovic in 2011, but 2012 should bring forth renewed spirits for Nadal and a higher ranking. Nadal has already said that he’s done with Davis Cup in the new year, and will focus on the Olympics and slams. That type of scheduling will leave him fresh in crunch time.

2. Novak Djokovic: Can you say pressure? When was the last time a player had to defend champions points in virtually every tournament that he entered? If Djokovic is going to top 2011 or even come close to it, he’ll have to start early in Australia and end late in New York. The Serb looked fragile in the fall, and although that was to be expected after his banner season, one has to keep in mind that a repeat of this year will be nearly impossible. I still fully expect Djoker to fight for every tournament that he enters; I’m just not sure he has the mental stamina to win as frequently next year.

3. Andy Murray: Back in the mix, but not quite there. Murray will likely remain a top 5 player until he’s ready to retire, but that doesn’t mean he’ll dominate the sport anytime soon. The Scot ended the second half of the season with a flourish, but he still came up short (and injured) when it mattered the most. Murray’s arsenal still lacks the pop that it needs to roll through the calender, but when given his opportunities, he’ll continue to cash in.

4. Roger Federer: Entering 2012 with 17 straight wins should warrant R-Fed a higher ranking, no? Well truth be told it shouldn’t. Even though Federer dazzled us all by winning three straight titles to end ’11, the week-to-week grind and consistency required to finish top 3 isn’t there anymore. I’m not suggesting that Federer won’t win a slam next year—or grab elusive gold at the Olympics in London—but I also wouldn’t be surprised if he loses to Kevin Anderson at the Miami Masters, either.

5. Juan Martin del Potro: How proud are we of Delpo? Ranked No. 485 to end January, del Potro clawed and slapped his forehand back to No. 11 by November. The towering Tandil native possesses an elite physical and mental game that’s rarely seen, and you can bet your bottom dollar that every top 10 player is aware of his skill set. In order for del Potro to be ranked higher he’d need a full bill of health next year, and I’m just not sure his long limbs and fragile wrist are ready for that yet.

6. Jo-Wilfried Tsonga: Another no nonsense player ready for the biggest stages. Tsonga has proven his merit against the very best for years, and his bazooka serve and muscular forehand are still tough to defeat. Tsonga, like Delpo, has been physically fragile throughout his career, and that lack of fitness will likely prevent him from finishing higher. However, when he’s on, like a Delpo, he can beat anyone across the net.

7. John Isner: This is where it could get dicey. Isner finished ’10 ranked No. 18 but showed signs of improving. His serve is undeniable, and his forehand remains a knockout blow; there’s simply nowhere to hide when those two shots are on. However, Isner’s backhand isn’t world class, and his movement will never be Ferrer-esque. At 6’10” and 245 lbs, Isner would be the tallest top 10 inductee ever, and it would be well deserved. The great thing about this sport remains that a giant serve will always provide great dividends: An ace, or a service winner don’t require a lot energy. And to Isner’s credit, he’s more than just an aces or two: he’s got heart and soul for the game.

8. Tomas Berdych: Will we see a different Birdman in 2012? With Sunday’s not being his favorite day of the week, Berdych reached the quarters or better of 15 events in 2011. Not known for his finishing touch, Berdych’s talent and ball-striking should be enough to fill up his bank account and leave him a top tenner for at least one more year. I’d like to see more from Berdych going forward, but let’s be honest, he loves to disappoint.

9. Alexandr Dolgopolov: Where there’s genius, there’s a way. Dolgopolov looks at tennis from a surfer’s perspective: He’s stoked for a high wave and doesn’t mind crashing after the thrill. With questionable shot-selection and a great knack for the extraordinary, Dolgopolov’s wacky game provides entertainment value at its fullest. Here’s hoping that he’s not satisfied with his current rank of No. 15.

10. Milos Raonic: More ducking in the front row for spectators? Raonic, who won Newcomer of the Year in 2011, will have a truck load of points to defend in January and February. Taking the sport by storm to start the season, Raonic’s detonating serve and mental fortitude could see him finish amongst the world’s elite. Owning the ability to play the big points well, Raonic’s maturity and dedication to improvement will only be rewarded throughout the rest of his career. He might not have the most complex game to figure out, but his blazing serve and positive demeanor are rare traits not every player possesses.

Do you agree with my pics? Please share your thoughts below.