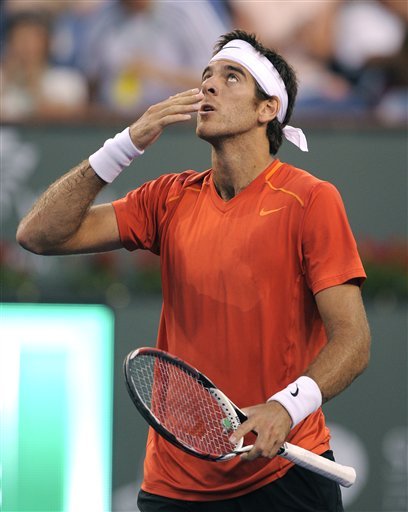 Participating at the BNP Paribas Open this week, del Potro managed to win his first Masters 1000 match since November 2009 when he defeated Czech Radek Stepanek in the first-round.

Prior to facing defending champion Ivan Ljubicic in the second-round, del Potro addressed his recent victory at the Delray Beach event in Florida, what aspects of his game he hopes to improve on for the rest of the year, and how much the support of his fans aided him throughout his rehab last year.

Q) After dropping to No. 485 on the ATP World Tour following your second-round defeat at the Australian Open, did you see yourself climbing back into the top 100 in such a short period of time?

A) I knew I could if I was healthy and working hard.

Q) What aspects of your game are you still hoping will improve as the season continues?

A) All the aspect needs to be improved to reach the top.

Q) What are the top priorities in your career at this point?

A) [To] stay healthy, enjoy the game and improve everyday.

Q) Are you looking to play a full clay-court schedule after the Masters 1000 events in Indian Wells and Miami? Are you looking forward to the challenges of clay court tennis?

A) Yes I will play a few clay court events. I like clay, I was born on it.

Q) Have you noticed any changes on Tour in the last year or so? Have you had to make any adjustments to your game in 2011?

A) Not really, I just started back so I still need to see the difference.

Q) Do you feel the dominance of Rafael Nadal and Roger Federer will continue this year, or will other players continue to battle for the top titles like Novak Djokovic did at the Australian Open?

A) I think Rafa and Roger are still the best, but Novak and others are getting closer and closer.

Q) Would you say that it’s physically harder to comeback from injury, or mentally more difficult?

A) Both, but maybe the mental part maybe a bit harder.

Q) Finally, how much has the support of your fans throughout the last year meant to you? Do you feel a different level of support from them now when you enter Tour events?

A) I really appreciated the support of the fan also when I was not playing, and now that I am back I feel them even closer than before.