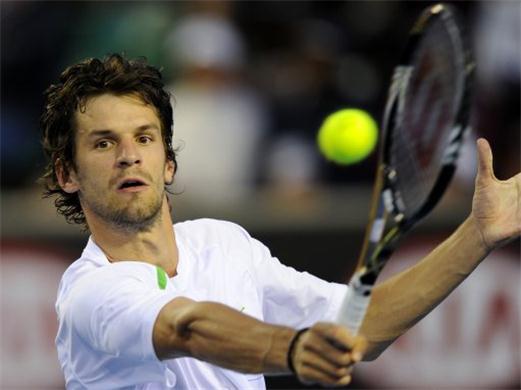 After posting a successful year which saw him win the Wimbledon doubles title and finish the season ranked No. 57 in the world, German tennis star Philipp Petzschner has continued his stellar play in 2011 by winning the ABN AMRO World Tennis Tournament with partner Jurgen Melzer, and most recently advancing to the quarterfinals of the singles draw during the Dubai Duty Free Tennis event.

Possessing one of the most fluid serves in the game, Petzschner discusses his goals for the remainder of the year; how he sees the future of German tennis, and which up-and-coming youngster he feels will have the biggest breakthrough this season.

Q) At this stage of your career, are you concentrating more on your singles results or your doubles events with teammate Jurgen Melzer?
A) First of all I’m only trying to play tennis and have fun with it, but of course I’m concentrating a lot more on my singles even if I’m more successful in doubles at the moment.

Q) After reaching a career high of No. 35 in the world on the ATP World Tour in September of 2009, what kind of ranking goals have you mapped out for yourself in 2011?
A) I want to get [back] to the top 30 and see where it leads [me] from there.

Q) John McEnroe has gone on record as saying that he believes that your service motion is the best that he’s ever seen. Can you discuss the elements of your serve that have led you to having such a successful motion? Did you spend a lot of time as a junior developing your delivery?
A) I mean words like this from John McEnroe is an honor, but as anybody else of course I try to practice serving a lot because it’s a key shot in tennis and especially in my game.

Q) To a degree, Germany has not produced the level of singles champions that it once did when Boris Becker and Michael Stich were winning Grand Slam events. Can you provide your thoughts on the state of the men’s game in Germany, and if you believe that the country will once again produce great singles champions?
A) I guess it’s just a matter of time until we create a big champion again. I think we have a lot of really good players in our country but [we’re] just missing a top player who boosts up our energy as well.

Q) What would you deem your favorite surface on Tour at this point, considering that you have had great results on all the major surfaces?
A) I’ve always loved playing on grass, especially [at] Halle and [at] Wimbledon.

Q) After being on Tour for 10 years, what significant changes have you seen in the level of play within the top 100? Is the competition on the men’s circuit as strong as it’s ever been?
A) I think the tennis is improving every year and the top 100 are getting better and better.

Q) Which player do least like to face on Tour and why?
A) I think [Rafael] Nadal is the toughest opponent you can face because he just never gives up and is such a great fighter.

Q) Which up-and-coming player from the group of Milos Raonic, Richard Berankis, Alexandr Dolgopolov, Bernard Tomic and Grigor Dimitrov can you see making the biggest impact on Tour?
A) I think Raonic can be a really tough player. When his serve is on he can be hard to beat.