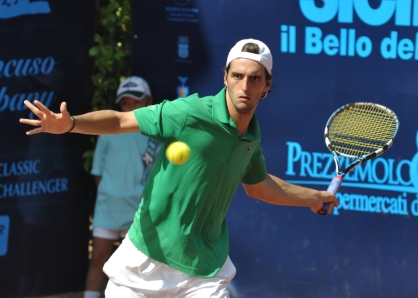 Following in the great history of the Spanish armada, 22-year-old Albert Ramos-Vinolas has continued his quick and productive rise towards the world’s top 100.

Improving his ranking 22 spots from the beginning of the season, Ramos-Vinolas currently stands at No. 145 in the world. Defeating the likes of Fernando Gonzalez, Victor Hanescu, Nicolas Lapentti, and Michael Russell this year, the Spanish left-hander has his sights set on becoming a consistent member of the ATP World Tour’s 250, 500, and 1000 point series events.

In the following interview, Ramos-Vinolas discusses what his victory over former top-tenner Gonzalez meant to his career, how he’s benefitted on Tour from being a left-hander, and which Grand Slam he would most like to win.

1. What type of confidence did you take away from defeating Fernando Gonzalez in Barcelona?

Well, the truth is [that] it was really important for me—especially playing at home—with all the public behind me, my family. It made me understand that I am not that far away from the top players. Now I know I can beat them, and this week I upset another great clay player, Victor Hanescu. I don’t know for example I would have beaten him (Hanescu) without the experience made in Barcelona.

2. What main factor would you say has contributed to your jump of over 300 spots on the ATP World Tour rankings since the start of 2009? Would you attribute your success to more physical or mental improvement?

I guess it is a combination of it all; I did improve a lot physically. I have worked really hard for a longer period of time and I think this is also why I feel a lot stronger and more confident in myself.

Yes, I think being a left-hander helps a lot—players are not used to playing against us—I also don’t like to play against left-handers. Of course you don’t win matches because of being left-handed; you have to take advantage from being a left-hander, [and] develop your weapons and get your opponents into trouble.

4. What are your immediate and long term goals on Tour?

Mostly I want improve all the things in my game. [I’m] working hard day by day [and] focusing only on my next match, without thinking of any concrete goals. I want to keep learning, [and] that will make me a better player, [and] the ranking will improve without me noticing.

5. What part of your game would you like to improve the most by year’s end?

I would like to improve my offensive game, my net game, and my serve. This is my next step.

6. Do you readily train with Spanish players, or do you like the experience of training with different types of players from different
countries?

I think that this is one of the things I haven’t been doing well. I have been practicing almost exclusively with Spanish players, and that doesn’t help me develop all the aspects of my game. I need to practice with different kind of players, playing all sorts of styles, coming from different countries.

7. If you could win any title on the circuit, which one would it be and why?

It would be the US Open. I like New York a lot, [and] it would give me immense satisfaction to win a title there.

8. What players did you look up to while you were developing as a junior?

I am lucky because I grew up in a club that formed many great professionals (the tennis Club Mataro). Players that played there included: Tomas Carbonell, David De Miguel, Jurdi Burillo, Julian Alonso, and Juan Ignacio Carrasco. Having them in my club while growing up as a small child made me wish to play this sport. They were a great example for me.

9. What type of changes, if any, would you like to see the ATP World Tour make?

Well, principally I would change the distribution of the money among the players, I believe that inferior (Challenger) players should be able to play at least without losing money.

If you want to travel with a coach, you need to be top 150 in the world, otherwise you will lose money, in a professional sport with so much exposure I think it is crazy.

Everyone knows that the money is generated by the top 20 players; they are the ones filling the stadiums. But you must not forget that they are important people only because of the great amount of players that play this game around the world.