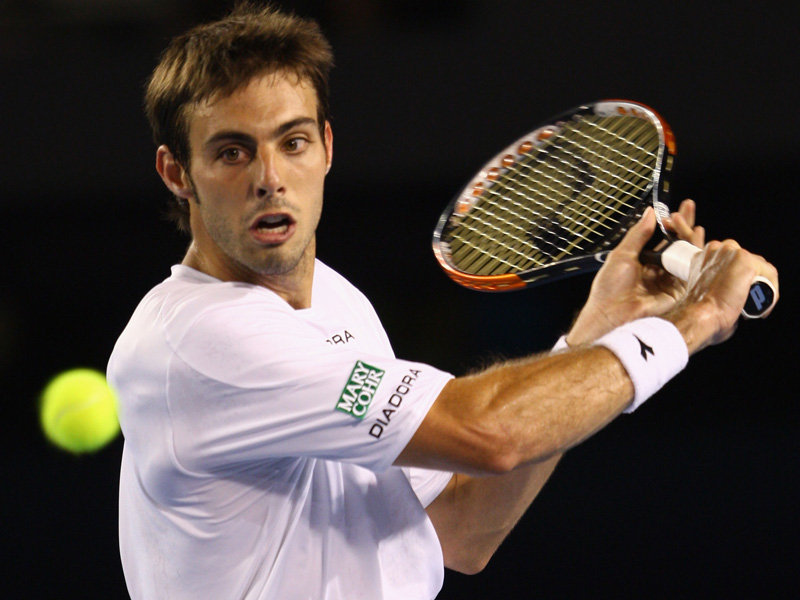 Competing in his Davis Cup debut last weekend in Spain, current world No. 110 Marcel Granollers recently had a chance to stop by and give Tennis Connected an exclusive interview.

Granollers, 23, began his year by defeating current world No. 7 Robin Soderling during the first-round of the Australian Open for his biggest win to date. Capturing two doubles titles on the ATP World Tour in 2010, Granollers was victorious during the first week of the season in Chennai, India, with partner Santiago Ventura, which was followed by his second title of the year in Costa do Saupie, Brazil, with Pablo Cuevas.

Ranked No. 25 in the world in doubles, Granollers shared an intriguing look into his unique game style; his love for soccer, and why he believes having one coach is ultimately the best decision for a player.

Granollers is currently participating in a Challenger level event in Rabat, Morocco, as the No. 5 seed.

Q. How much confidence did you take away from defeating Robin Soderling in the first-round of the Australian Open?

Q. Capturing your first career title at the US Men’s Clay Court Championship in 2008, what components of your game or confidence do you need to improve in recapturing that level of play?

A. I am a better player than the Marcel who won at Houston. I am a much more mature player with more game solutions then two years ago. For me, winning in Houston came as a surprise. It was the first ATP event in which I was direct acceptance in the main draw and I won it. During the weeks before Houston I had won many matches on Challenger level, and I was used to winning many matches in a row. That is what I have been missing lately, winning many matches in a row [to] arrive at the end of the week still competing. I need to get used to winning.

Q. You recently exited the world’s top 100 after being ranked No. 44 in the world (February 2008). Is regaining a top 50 ranking your priority for this season?

A. Yes, definitely. I believe that the strategy and the work that I did during the winter and these first [few] months [will] make the top 50 a natural and realistic goal for this season.

Q. Your game consists of very low take-backs on both your forehand and backhand groundstrokes. What would you attribute to your unique style of play. Did you ever encounter a coach trying to alter your strokes?

Q. Playing well on both hard and clay-courts, what would you consider your favorite surface and favorite tournament?

A. I don’t know what to answer. I also think that I play the same level on both courts, and so show also the results. I like both surfaces, and I think that it is necessary if you really aim to the high rankings nowadays.

Q. You currently have two coaches working with you (David de Miguel, Alex Calatrava). Do you find that having more than one coach aids in your overall improvement, or have you ever encountered a conflict of interest?

A. Well, I travelled only three weeks with Alex Calatrava, when David was busy elsewhere, I can’t really say that I have two coaches now. Sometimes when you work in Academies it happens to travel with different coaches, and on the mental side it can be helpful not to see always the same face every day at breakfast and on the court. At the same time one coach needs to have the leading role, and the others need to execute the program that the main coach gives. I prefer having one coach.

Q. How important has Davis Cup competition been to your career? Do you enjoy the team atmosphere of Davis Cup along side your countrymen?

A. Davis Cup is extremely important. Now, after my real debut ( I was in the team last year but didn’t play) I can tell it is an incredible experience. The connection with the people, the team, the media. Everything gets more intensive. I must say that I have not been nervous at any time during my debut, all the team has helped me a lot, knowing it was my first match. I really like to represent my country and to be so close to the Spanish fans. It is one of those experiences you don’t forget.

Q. You’ve increased your doubles ranking recently to No. 25 in the world. Do you find that playing doubles increases your level of play for singles, in terms of working on your volleys and return game?

A. Yes, I think playing doubles helps a lot to improve your singles. The serve, the returns and the volleys get more precise, because you have a smaller court and you decide with your partner where to hit. Doubles also helps me very much to regain my confidence. If I lose first round in singles, but keep going in doubles all week until the final, I get confident to the next singles tournament as well.

Q. With many years left in your career, what would you like to accomplish before you retire?

A. A tournament that is very important to me, and where I never played well is Barcelona. I am a member of this club, like my brother. My parents, my friends and relatives come to watch me play and I would give anything to win that tournament. Of course, I would also love to win a Slam event or another Davis Cup.

Q. Finally, if you could disclose one locker room story that the public is not aware of, what would it be?

A. Well, in the locker it’s all about soccer. Most of the Spanish players are for Barcelona or Madrid. We discuss a lot in the lockers about soccer, but [we] can be pretty loud and annoying for the other players. At this time, being a fan of Espanol they are giving me quite a bit of sh…! I don’t worry, and wait until Espanol beats them to pay them back!